My coworker Ken and I talk as much about our jobs as we do about outdoor adventure. Nearly every Monday, either he or I return to the office with tales of camping, kayaking, ziplining, etc. It was only a matter of time before we planned a trip together.

On a Tuesday, I opened an email from Ken with the subject, “Up For This?”

The message: “Check out Oconee State Park in Oconee County in South Carolina, aka: the Mountain Lakes region. I grew up here, and I think you’d love it.” There was also an attached picture of a helmet-clad group, dunking into a whitewater rapid with wide smiles on their faces.

We had reserved a log cabin for the weekend before lunch.

I was unsure what to expect, apart from what that picture showed. Ken and I were booked to shoot the rapids of the Chattooga River, a renowned waterway in the world of whitewater.

After boarding a re-purposed school bus at the Mountain Rest outpost of the Nantahala Outdoor Center with about 20 other people, we headed to our launching point underneath a highway overpass. That overpass would be the last sign of civilization we would see all afternoon. The Chattooga marks the extreme northeast border between Georgia and South Carolina. It cuts through pristine wilderness and was designated a National Wild and Scenic River by Congress in 1974.

On the bus with us was Payson Kennedy, co-founder of the outdoor center and a legend among river rats. He’s been paddling the Chattooga since the 1960s. Now in his 80s, Kennedy shot the 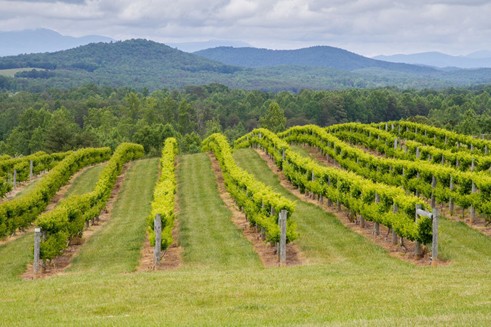 rapids solo in a kayak while the rest of us
were in groups inside big yellow rafts. We were running Section 4 of the river containing what are arguably the most famous series of rapids in North America, the Five Falls. It’s five class IV and V rapids in quick succession over a third of a mile, the grand finale of an exhilarating run.

Section 4 is a near perfect stretch of river. Along with all those legendary rapids, there are stretches of peaceful water flowing past towering trees, giant rock outcroppings and sandy banks. When we stopped for lunch, we gathered around an overturned raft serving as a buffet table filled with sandwich fixings and chatted with Kennedy. He noted that in all the decades since he started paddling here, the scenery along the river hasn’t changed. The Chattooga is still as pristine as ever. 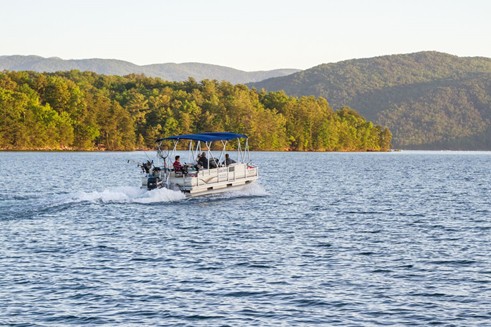 After a day of whitewater, it was time for some calm water and a pontoon boat. Lake Jocassee shimmers like an emerald jewel beneath the forested rolling peaks of the Blue Ridge foothills not far from the Chattooga River. I grew up a lake rat in the Deep South and had never seen a large Southern body of water this pretty and uncrowded. Local outfitter Jocassee Keowee Boat Rentals provided Ken and me a boat for the day. We set out in mid-morning to explore the lake, with commentary provided by a well-researched Ken.  He explained that Jocassee’s waters are so deep (more than 300 feet in places) and clear that it’s considered one of the best diving spots in the Southeast, thanks to the purity of the water coming off the Blue Ridge Escarpment north of the lake. The remnants of a community from before the reservoir was created still exist at the bottom—including a bed and breakfast. There’s also a school bus, a basketball hoop (complete with a bowling ball as a basketball) and a sunken Chinese sailboat surrounded by pink plastic flamingos. I peeked my head over the edge of the boat to see if I could spot anything, but the lake was so deep it was impossible to see the bottom. Next time, we’d rent scuba equipment. 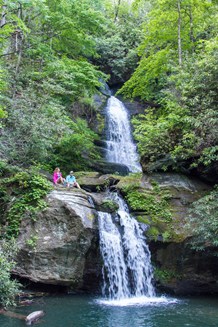 The water tumbling down from the mountains also makes Jocassee a haven for waterfall hunters. Four major waterfalls and many unnamed smaller ones plop directly into Jocassee. At some falls, it’s possible to pull the nose of your boat into the splash zone to feel the refreshing mist. We headed to Laurel Fork Falls, a three-tiered, 80-foot cascade at the northeast corner of the lake.

Since the lake level was lower than usual, we couldn’t pull the boat into the cove, so we beached it and walked along a sandbar to the falls. All we could see was the bottom tier.

Ken climbed straight up the rock face beside the falls, and I followed. We ended up at a small pool beneath the second tier, a nice secluded swimming hole for those willing to make the arduous, sometimes slippery climb (and only recommended for those with advanced hiking skills who are comfortable on steep, rocky inclines).

The swimming hole was still too chilly to swim in in April with its mountain runoff water, so we headed back down to where the boat was beached. I thought we were getting back on the boat, but Ken showed me where the Foothills Trail connects to the lake, and we decided to take a short two-mile hike to the top of the falls. The Foothills Trail is a 76-mile footpath that curves around the northern part of the lake. Along the way, Ken pointed out the Oconee Bell flower. This rare, early-blooming wildflower only grows wild in this region of the country. This section of the trail is one of the best places to spot its white blooms. 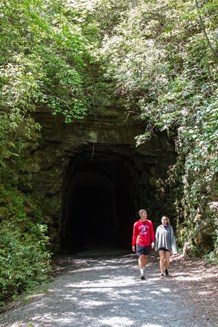 After a short lakeside hike outside the cabin in Oconee State Park, I went out seeking more waterfalls while Ken stayed behind to take care of his old dog. Ken told me about some other can’t miss waterfalls, including Whitewater Falls—the top of the falls being in North Carolina and the bottom in South Carolina; Yellow Branch Falls, a cascade that looks like a multi-layer wedding cake of rock and falling water; and Issaqueena Falls adjacent to the Stumphouse Tunnel Historic Site, a tunnel to nowhere hollowed out of the mountain in the mid-19th century. The tunnel was never completed, so it comes to an abrupt stop halfway through the mountain. It’s a roadside curiosity seven miles northwest of Walhalla on Highway 28, aka: Highlands Highway.

“You can walk into the tunnel, dripping with condensation, but bring a flashlight because it’s as dark as a cave, and just as cool, even when it’s hot outside,” Ken said. The 100-foot Issaqueena Falls sits below the tunnel with an overlook at the top and a short trail that leads you to the bottom.

The day ended at Chattooga Belle Farm in a rocking chair with a panoramic view of the Blue Ridge Mountains rising above the muscadine vineyards and fruit orchards, after I met back up with Ken.

This was a trip Ken and I would talk about for way longer than just a Monday around the water cooler.

Find your own adventure when you Visit Oconee SC!