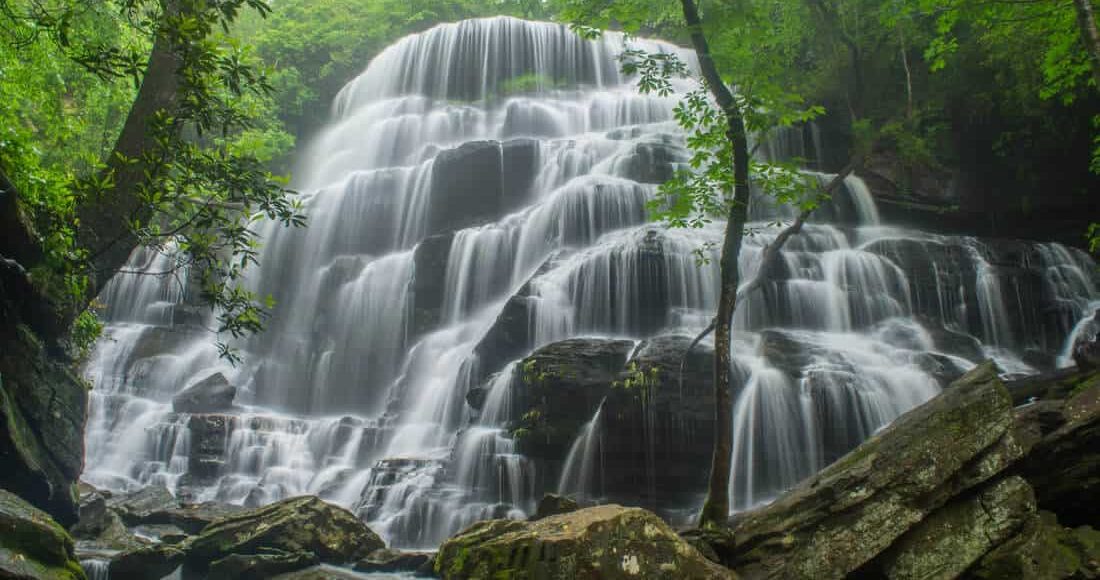 The invitation—a couple of days with my friends, Jay and Janet, in a rented cabin in South Carolina’s Mountain Lakes region—couldn’t have come at a better time. With my daughter a new college freshman and my husband traveling for business, the house felt particularly empty, and I was pondering how I was going to spend all my newly found alone time. Enter: the opportunity to explore a destination of a lifetime, named by National Geographic as one of the 50 Last Great Places in the World. It’s no wonder, considering the more than 300 waterfalls and 237,000 acres of mountain adventure.

Our tour started with Lake Jocassee, a 7,500-acre mountain lake set within the rugged Jocassee Gorges. Surrounded by thick forest, the deep blue-green lake is as undeveloped as it is beautiful: dotted with islands and rimmed with waterfalls, it’s popular with kayakers, anglers, stand-up paddleboarders and boaters. Nearby, an untrammeled landscape of rushing rivers, tall mountains and deep valleys promised even more natural beauty.

Curious to see more of the gorgeous lake than we could take in from the shoreline near the cabin, we spent our first afternoon on a chartered boat tour. Cruising through the glassy water, we passed by families with small children jumping into the water from anchored boats, groups of kayakers and older kids skimming the surface by way of a inflated board.

The waterfalls were especially striking for me. Some small, some large, they all began high on the forested ridges that surround the lake and crashed through mountain laurel and misty rainbows into the water. Although some are accessible via hiking trails, many can be reached only by water (as opposed to road access). Wright Creek Falls, a three-tiered cascade of water that plunges into the lake like a giant fountain, made me feel like I was in a meditation video: surrounded by nature’s peace.

A bit later, our boat brought us to Lower Whitewater Falls, which tumble 200 feet over a dramatic wall of rock before spilling into the lake. As we sat happily mesmerized by the shimmering water, enjoying the refreshing mist, our guide explained that Lower Whitewater Falls are part of a six-waterfall chain that meanders through North and South Carolina before coming to its dramatic conclusion at Lake Jocassee. “It’s a popular hike, and not too hard,” he said. “You should give it a try.” Captivated by the shifting rainbows, we decided to do just that the next day.

From the trailhead at Duke Power’s Bad Creek Hydroelectric Station, it took about 45 minutes to hike to the falls’ overlook. The walk—surrounded by hardwood trees and the sound of rushing water—was almost as gorgeous as the falls, which spill through clouds of mist on their way through the boulder-strewn gorge. Certain parts of our hike lent themselves better to silence—not due to difficulty, but simple enjoyment of the scene.

We spent that evening getting familiar with the waters of another one of the four pristine lakes, Lake Keowee, atop stand-up paddleboards. Between the easy learning curve and natural tranquility, I could see why this is one of the fastest growing recreational sports in the world. Though, I couldn’t imagine a better spot to try it. Bordered by slender beaches and thick forest, this lake features countless coves, inlets and islets to explore. Stand-up paddleboarding with the backdrop of a golden sunset was the perfect way to wind down. With the sun doing its beautiful thing, and the fall palette displayed on the surrounding trees, I was in the midst of what it means to breathe easy.

The next day the unanimous decision was to go whitewater rafting, something all of us had wanted to try—we’d never had the opportunity. Janet had recommended the nearby Chattooga River, which flows along the border between Georgia and South Carolina, falling more than 2,000 feet as it makes its way to the calm water of Lake Tugaloo. There, we were told we’d have the chance to raft over some of the most challenging whitewater in the southeast. What a way to introduce ourselves to whitewater rafting!

After safety training and a briefing on what to expect, our group boarded rubber rafts and began a gentle float down the river. As we closed in on the first rapid, our guide pointed out the route we’d take and reminded us of our roles, which included providing the power to keep us from getting caught in an eddy or whirlpool, keeping us on course or providing stability for the raft. When we shot through the rapid and over the seven-foot falls, it was nothing short of thrilling, not only because of the ride, but because I felt as though I’d actually had a bit of responsibility as well.

As much as we enjoyed the thrill of whitewater rafting, we spent the rest of the afternoon kayaking along some of the Chattooga’s more sedate stretches. Along the way, I gazed at clouds of blooming mountain laurel reflected in calm pools, as hawks and even an occasional eagle circled overhead. Some areas were quiet, while others were filled with the sounds of water as it burbled over the rocks. What I never heard was traffic: thanks to its protected status as a Wild and Scenic River, the Chattooga is bordered by a band of development-free land.

This experience tested me. I found the need to stay both present in the moment, and flexible to the currents. There were moments I felt totally in control and in charge, and others where I was a passenger on a ride. It made me think about life being like that too. It also reminded me of my friend, Joe Jacobi, who won a gold medal in kayaking in the 1992 Olympics. In wrapping up our Mountain Lakes stay, I decided to give him a call.

I called Joe on the drive home to share my river experience. “The Chattooga River is gorgeous and special,” he told me. “Nothing teaches you more about life than moving water. You learn when to fight and when to surrender to the flow.” He couldn’t have been more right. Spending time with friends in the open air, I’d realized that instead of dreading—fighting—the next four years while my daughter was away, I should take the time as a gift and see where the next challenge takes me.