High Falls County Park is on the shores of Lake Keowee.

The park consists of 46 acres and is one of three parks operated by Oconee County Parks Recreation and Tourism. 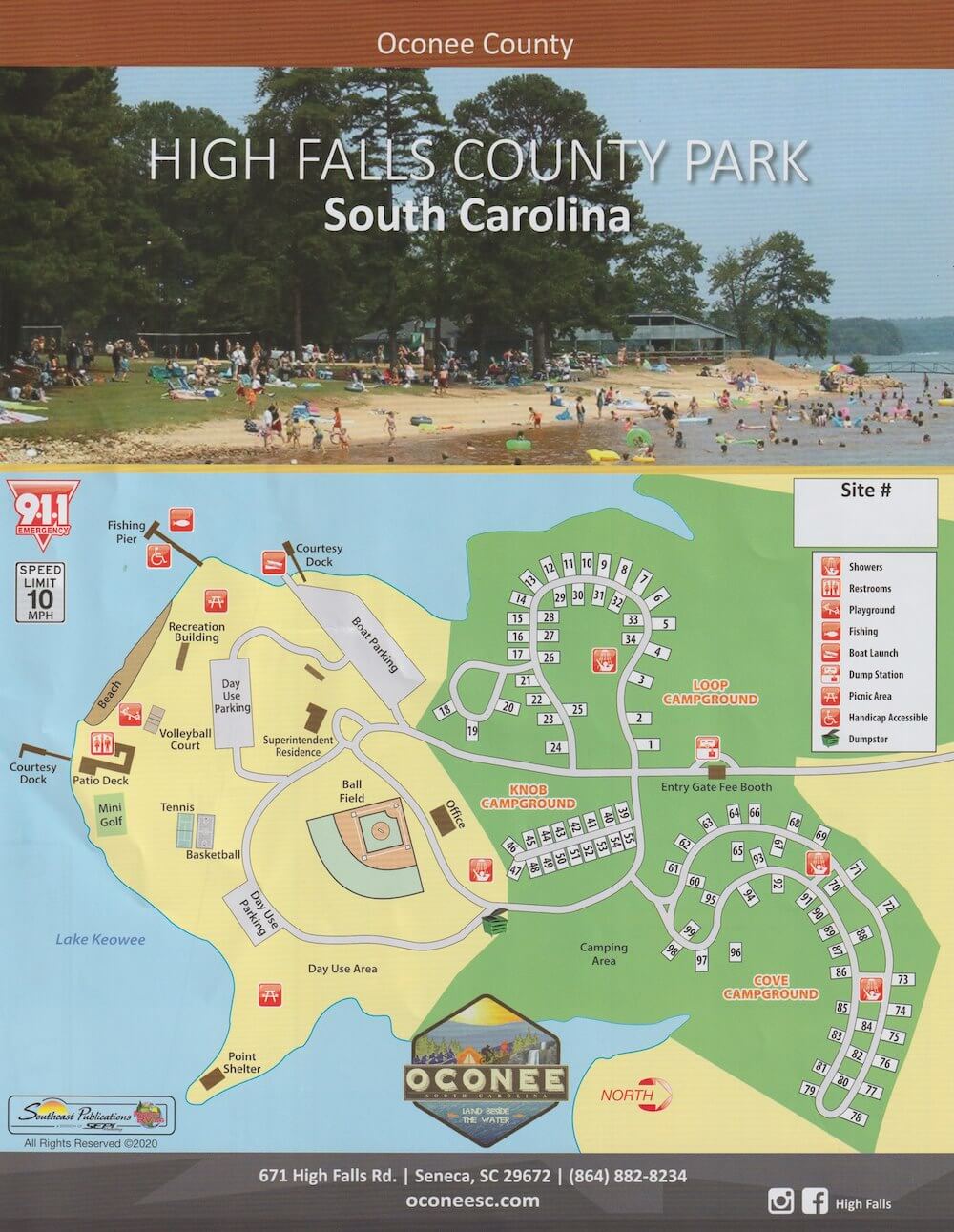 For more information and to make reservations, go here.

In the 1750s, the Treaty of Hopewell and Dewitts Treaty pushed the Native Americans out of the area and opened the land up for settlers to enter.

As more people arrived, the South Carolina state government divided the land into districts to make it easier to pay taxes. (Prior to this, the only option for paying taxes was to make the long journey to Charleston, SC, for payment.)

The first named district was the Washington District, then the Pendleton District, and by the 1820s, it was divided again, and this area became the Pickens District.

The town of Pickens (now referred to as “Old Pickens”) was built along the Keowee River. It was quite large with a courthouse, hotel, livery stables, and everything people needed at the time.

History of the House

The High Falls park office is located in a historic building that is one of the last remaining examples of architecture common to the area in the 1830s. The building is known as the Alexander-Cannon-Hill House.

It was built in 1831 by a man named Pleasant Alexander. Pleasant was the Sheriff and Post Master of the Pickens District. The house was considered middle class for the time, and 14 slaves originally lived on site. An interesting side note: A ten-year-old boy named Willis Junkins was one of Pleasant Alexander’s slaves. After the Civil War, Willis became a free man. He returned to Pickens and purchased the property where he was once enslaved.

In the post-Civil War Reconstruction years, Pickens was dying down. During this time, the South Carolina state legislature divided areas into counties rather than districts. As a result, Pickens District was split along the Keowee River, and the resulting counties were named Pickens and Oconee.

In 1874, the Alexander House was sold to the Cannons. The Cannons operated a family farm, and the house was utilitarian for their farming lifestyle.

The Hills purchased the house in the 1880s. The Hills did renovations and added two rooms and a second stairwell.

The house remained a family dwelling for the next eight decades.

From House to Office

In the late 1960s, Duke Power (a.k.a. Carolina Timber Land Trust) entered the picture. The company approached the state of South Carolina about partnering to create a system of lakes that would generate hydropower and cooling waters for a proposed nuclear facility. This partnership came to be, and land acquisitions took place so that Lakes Jocassee, Keowee, and Hartwell could be formed along with Oconee Nuclear Station.

During the lake planning phase, Duke Power purchased the Alexander-Cannon-Hill House. The house was in the proposed flood zone. In 1972, the decision was made to move it three miles away–from Pickens County to its present location in Oconee County. The house served as Duke’s headquarters during the construction of Lake Keowee.

When Duke Power finished constructing the lake and no longer needed the office, the building changed hands again. In the mid-1970s, the house was acquired by Oconee County to serve as a park office for the newly established High Falls County Park. Electricity was installed in the house, and various updates were made to the structure.

For decades, the building served its purpose. But not much thought went into the interior layout or the quality of materials used for “improvements” inside the house.

Since the fall of 2021, historic preservation efforts have been underway to restore the house and highlight its unique features. Park Rangers spent their off-season renovating two rooms on the first floor. In addition, the Park’s retail store has a new look reminiscent of the building’s past. The store offers souvenirs, gifts, and small necessities for camping.

Next up: Additional rooms on the first floor will be renovated to serve park staff better. There are plans to refurbish rooms on the second floor too. 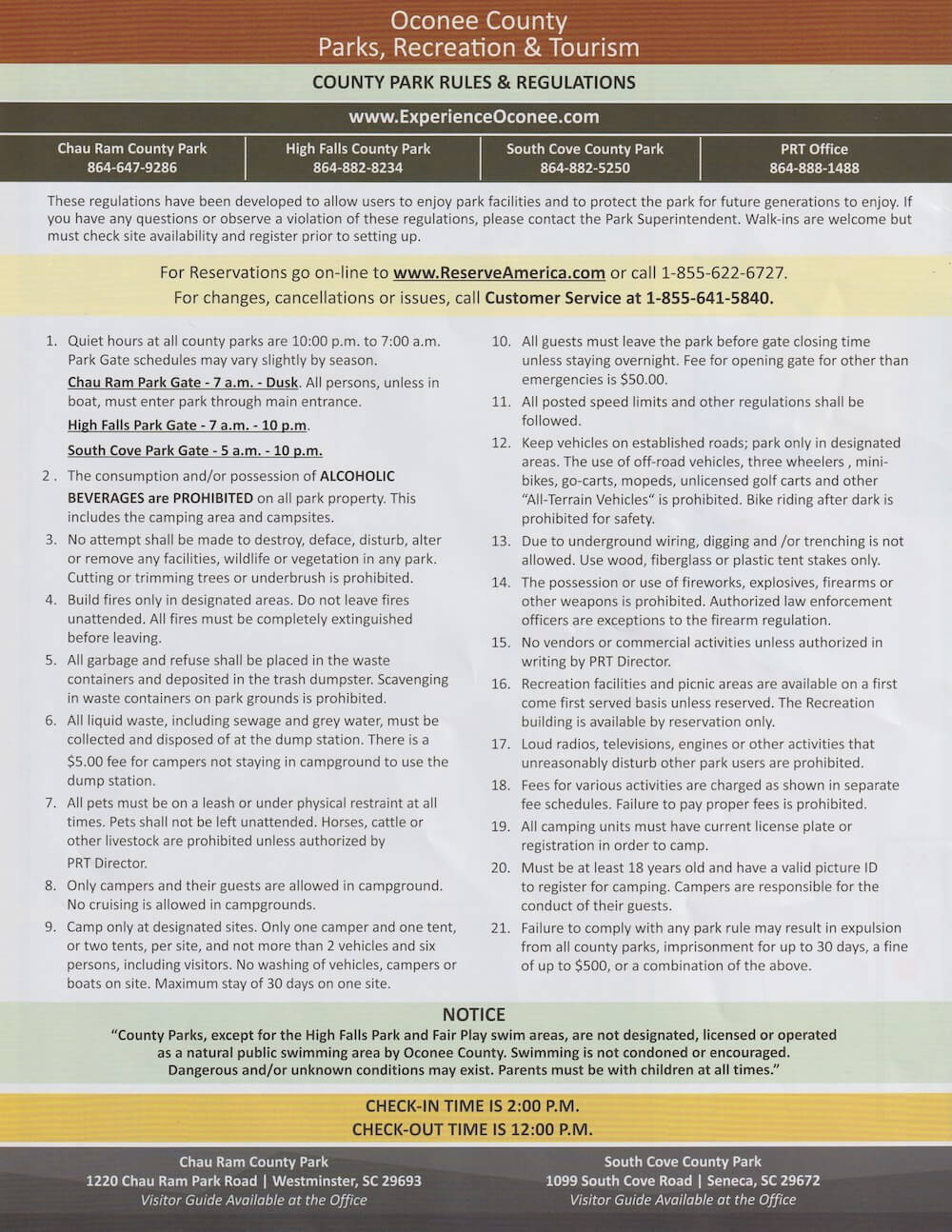 If you live in Oconee County, click here for pick up locations.