Recently, we sat down with Brooks Wade, of Jocassee Lake Tours, to discuss one of his favorite animals: the common loon.

Why does he like loons so much? Because they engage people more than other birds. Their calls are enticing; they are very cooperative and are not afraid of people.

The common loon is an ancient bird that looks the same today as it did thousands of years ago. They are known as “common” because they are so widespread. They breed across the top of the world from Alaska to Siberia.

The common loons we see in this area are approximately 2 1/2′ to 3′ wide. Their bodies are very dense and are designed for diving deep in the water to catch fish. They can dive up to 200 feet deep and stay underwater for 5 minutes. They have the least amount of wing surface to body weight of any bird. They have a short wingspan and can’t glide like other birds. Their legs are positioned towards their tail underneath their bodies, and they are not able to support their weight to walk on land. They look like a “flurry of energy” when they fly and need a great deal of space to get airborne. 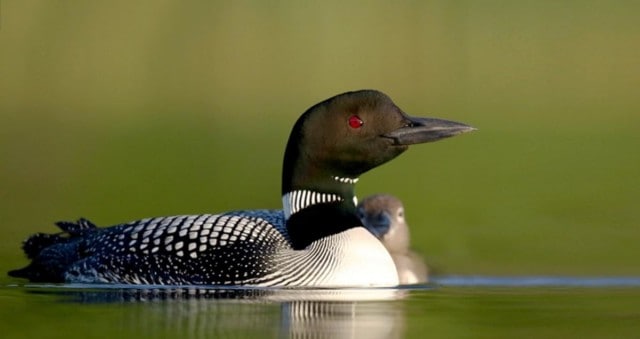 Loon coloring is remarkable. During the winter months, they are a uniform grey color because there’s no need to be “sexy” during this time. In January, they shed all of their flight feathers and cannot fly for 4-6 weeks. In February, they start molting into their summer look. They go from grey to their spectacular summer coloring. In their summer glory, loons become very pretty, dotted with white speckled patterns that help them attract mates. In March, their hormones start raging, and loons become more aggressive in preparation for breeding. A mass migration occurs in April.

Loons migrate 2,000 miles from their freshwater breeding grounds in the upper midwestern U.S. down to the marine environments in the Gulf of Mexico and Florida. During their migration, loons stop to overwinter on Lake Jocassee. This occurs from late October through March. Known to be site loyal, loons have been genetically designed to return to the same spot each season. Once they land, they don’t fly again until it’s time to leave in April. The same group of birds stays together; they huddle up and sleep in the middle of the lake away from the shore. They eat baitfish and crustaceans.

The modern development of manmade lakes in the southeastern U.S. has resulted in new site grounds for loons. At any given time, there are 100-150 common loons on Lake Jocassee. During the winter, we see an influx of loons stopping over to rest and prepare for the next journey on their southern migration.

For the fourth year, Jocassee Lake Tours is helping organize a volunteer study program that will help scientists study the health and behavior of common loons wintering in a freshwater ecosystem. During a two week period, participants can expect to witness molting, preening and bathing behaviors, group foraging, and departure behaviors as loons prepare for and begin to leave the lake in early March.

The results of the research will be used to raise awareness about the importance of lake reservoirs as a habitat for loons and other waterbirds, and how to best monitor and manage them. SESSION ONE will take place on February 23-29 and SESSION TWO, on March 1-7.  Visit their webpage to learn more about the 2020 Loon Research on Lake Jocassee and the details and costs associated with the program.

Subscribe
0 Comments
Inline Feedbacks
View all comments
Top wpDiscuz
0
0
Would love your thoughts, please comment.x
()
x
| Reply
We use cookies to ensure that we give you the best experience on our website. If you continue to use this site we will assume that you are happy with it.Ok