Like it or despise it, the movie Deliverance left a lasting impact and led to tourism in Oconee County.

The movie makes people uncomfortable.  But there’s no denying the filming of Deliverance generated public interest and resulted in political decisions that permanently protected one of our most treasured natural places–The Chattooga River.

Those who have seen the classic thriller, Deliverance, know the fictional Cahulawassee River where the movie was set.  The river had as much a starring role in the film as actors Jon Voight and Burt Reynolds.  But many people don’t realize that the actual river they filmed on was the Chattooga River, which runs along the top of the northwestern part of Oconee County and creates the border between South Carolina and Georgia.

The movie Deliverance led–literally–to the rafting scene on the Chattooga River.

Two men, who worked behind the scenes helping guide the film crew down river, went on to open rafting companies.

One man, Claude Terry, worked as a consultant and stunt double in the motion picture.  Along with some kayak buddies, Terry got involved with Deliverance because of his friendship with Lewis King.  King was also close with James Dickey who wrote the movie’s screenplay.  King played the role of Lewis Medlock in the movie.  Terry didn’t get any face time in Deliverance, but he assisted the actors in their navigation and safely guided them down the river during filming. When filming was over, Terry started a rafting company, Southeastern Expeditions, with equipment he purchased from the crew that had been used in the movie.  He also went on to found the environmental organization American Rivers.

Along with Claude Terry, Payson Kennedy was also a stunt double in the movie.  His experience helping on the film led him to found the Nantahala Outdoor Center (N.O.C.) which was one of the three companies granted a license to operate on the Chattooga River.

Wildwater Ltd. first opened its doors in 1971 after Deliverance filming ended.  Jim and Jeanette Greiner pioneered the company, along with the help of their four children.  Read more about their history here.

In 1974 Jimmy Carter was Governor of Georgia.  After running a stretch of the river in a tandem canoe with Claude Terry, Governor Carter was inspired to push legislation through Congress that federally designated the Chattooga River as Wild & Scenic.

This 1974 act of congress prevents the construction of dams or development within the river corridor.

Known as the “Crown Jewel” of the Southeast, the Chattooga was the first river east of the Mississippi to be granted the Wild & Scenic designation.

The Chattooga River is under the purview of the federal government and is managed by the U.S. Forest Service. It is the only Wild & Scenic river that is commercially rafted. Regulations, due to the Wild & Scenic designation, limit the number of companies who can operate on the river; as well as the number of customers the companies can take down each section of river.  These limits help ensure the Chattooga doesn’t experience mass crowding or over use typical of commercially rafted rivers.

Come visit “The Crown Jewel” of the Southeast!  Experience the wild and scenic setting one movie left behind for the public to enjoy.

The area is beautiful and peaceful, but the rapids and undercurrents of the river can be dangerous.  Commercial guide services are recommended for those without whitewater experience.  There are plenty of people who come to the Chattooga and run their own private trips down river.

The US Forest Service has regulations about the use of the river and all visitors planning to float the upper or lower sections of the Chattooga Wild and Scenic River must carry a self-registration permit at all times. Visitors can pick up a permit (free) at put-ins along the upper and lower river.

An amazing ride through Bulls Sluice on the Chattooga during our family vacation stay at Maplecrest at Lake Jocassee will never be forgotten. 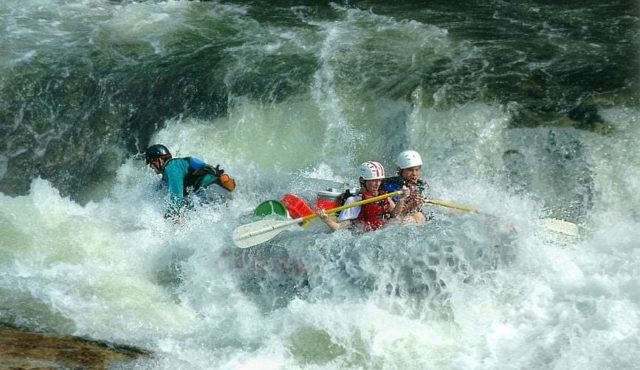